Home » About Us » Our Story » Oswald Chambers 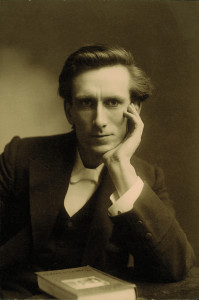 Oswald Chambers was born in Aberdeen, Scotland, in 1874, the youngest son of a Baptist minister. Chambers was converted at age 15 and began a period of rapid spiritual growth, along with an intense struggle to find God’s will and way for his life.

Feeling a strong call to study for the ministry, he left the University of Edinburg and entered Dunoon College, near Glasgow, where he remained as a student and then a tutor for nine years.

In 1906 he came to the United States with the famous Japanese evangelist Rev. Juji Nakada. Nakada had been introduced to GBS by Charles and Lettie Cowman and was to speak at the school’s December Convention.

Upon their arrival, Chambers was enthusiastically welcomed and invited to speak. After the convention, Chambers was asked to remain at the school to teach, which he did for the next six months. At the end of the school year, Chambers served as a Bible teacher for the annual Camp Meeting.

This began a lifelong friendship and working relationship between GBS and Chambers. GBS published a number of Chambers pamphlets and books. After his brief tenure on the GBS Faculty, Chambers served as Bible teacher for the Camp Meetings from 1907 – 1910. GBS became Chambers’ American home.

The school has dedicated the room he taught in as the Oswald Chambers Room. A large oil portrait of Chambers is displayed there as well as pictures and memorabilia from his life and ministry. Chambers is best known for his devotional, My Utmost for His Highest.